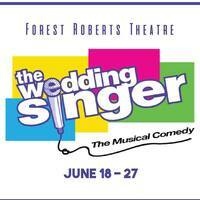 Based on Adam Sandler's hit movie of the same name, this musical will bring you back to when hair was big, greed was good, and the wedding singer might just be the coolest guy in the room.

It's 1985, and rock star wannabe, Robbie Hart, is New Jersey's favorite wedding singer. He's the life of the party until his own fiancée leaves him at the altar. Shot through the heart, Robbie makes every wedding as disastrous as his own. Enter Julia, a winsome waitress who wins his affection. As luck would have it, Julia is about to be married to a Wall Street shark, and, unless Robbie can pull off the performance of a decade, the girl of his dreams will be gone forever.

Join us at the Forest Roberts Theatre for a night filled with music, laughs and love.

Additionally, join us after the first performance for an exclusive opening night party featuring complimentary food and beverages, a photo booth, and a meet and greet with the cast and creative team! The opening night party is included with a ticket purchased for opening night, October 11th, and will follow the show in Forest Roberts Theatre lobby. All theatre and dance majors and minors are invited to attend free of charge.

We are excited to announce that the performance on Tuesday, July 23 at 7:30pm will be our sensory friendly Theatre for All performance!