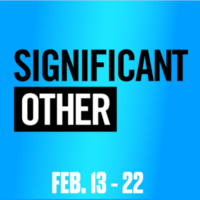 This new play by Joshua Harmon explores the ups and downs of the modern dating world. In this "unromantic romantic comedy," twenty-something Jordan Berman would love to be in love, but that’s easier said than done. So until he meets Mr. Right, he wards off lonely nights with his trio of close girlfriends. But as singles nights turn into bachelorette parties, Jordan discovers that the only thing harder than finding love is supporting the loved ones around you when they do. Performances are on the following dates:

Saturday, February 15 at 1:00pm (Theatre for All Performance)

Tickets are $17 for the general public, $12 for NMU faculty/staff, seniors, and military, $10 for students, and $5 for NMU students with a current ID. Located in the James A. Panowski Black Box Theatre in the McClintock Building.

Additionally, join us after the first performance for an exclusive opening night party featuring complimentary food and beverages, a photo booth, and a meet and greet with the cast and creative team! The opening night party is included with a ticket purchased for opening night, February 13th, and will follow the show in McClintock 106. All theatre and dance majors and minors are invited to attend free of charge.