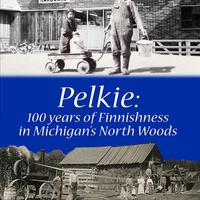 On Saturday, November 9, the Beaumier U.P. Heritage Center will be hosting a premiere showing of the new documentary, “Pelkie: 100 Years of Finnishness in Michigan’s North Woods” directed by Dr. Michael Loukinen. In addition to the film, there will be a community forum on the nature of these U.P. small town havens. The first, during the intermission, will discuss the creation of these ethnic communities and the second after the film will focus on the “unmaking” of these communities as is depicted in the film. The film will begin at 1 p.m. in John X. Jamrich Hall 1100.  Admission is free and open to the public. Coffee and snacks will be served. Discussions will be led by Dr. Loukinen, Dr. Jon Saari, professor emeritus in History, NMU and Daniel Truckey, Director of the Beaumier U.P. Heritage Center.

Pelkie, Michigan is a small rural community in Baraga County and the film tells the story of the community’s rise as a center for Finnish ethnicity and its eventual decline. The four remaining members of Pelkie’s second generation and their third-generation children tell the story of Pelkie, their once-thriving dairy farming and logging community in Michigan’s Upper Peninsula (UP).

Admission is free and open to the public