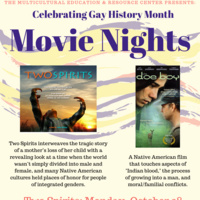 Two Spirits will be shown on Monday, October 28

Two Spirits interweaves the tragic story of a mother's loss of her child with a revealing look at a time when the world wasn't simply divided into male and female, and many Native American cultures held places of honor for people of integrated genders.

Doe Boy will be shown on Tuesday, October 29

A Native American film that touched aspects of "Indian blood," the process of growing into a man, and moral//familial conflicts.