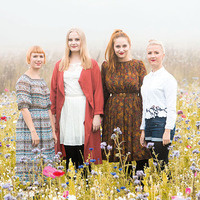 The Beaumier U.P. Heritage Center is proud to announce the return to Northern Michigan University of the Finnish folk quartet, Kardemimmit. The concert will be held on Thursday, September 19 in Forest Roberts Theatre at 7:30 p.m.. Tickets prices are; General Public - $10 advance/$12 door, Students and under 18 - $5 advance/$7 door. Tickets can be purchase at all NMU ticket outlets and www.tickets.nmu.edu. This concert is being sponsored by the Finn Grand Fest 2005 Legacy fund.

Kardemimmit is a band of four awesome women playing the Finnish national instrument, kantele. The band members are Maija Pokela, Jutta Rahmel, Anna Wegelius and Leeni Wegelius. Kardemimmit is in charge of their own music – they compose, as well as arrange, write lyrics and produce. Alongside 15 and 38 stringed kanteles, singing has a big part in Kardemimmit’s musical universe where original pieces with a modern approach still have a strong foundation in Finnish, Eastern European and Scandinavian traditions. The Finnish reki-singing style, 19th century dancing music and Perhonjokilaakso kantele playing style, Eastern Finnish archaic improvisation and ancient runo singing are all present in Kardemimmit’s music.

The band was founded already in 1999 in the musical institute Juvenalia in the band members’ home town Espoo. The long mutual history can be heard in their unique sound. The silvery tones of kantele flow together with the mezmerising singing harmonies. As a kantele band Kardemimmit is a pioneer: in the year 2004 Kardemimmit was nominated the Band of the Year by Kantele Association in 2004 and the next year they won the International Kantele Competition. The following years Kardemimmit has been touring extensively in Europe, North America and Japan. Kardemimmit has released five albums, Viira 2006, Kaisla 2009, Autio huvila (Abandoned Villa) 2012, Onni (Happiness) 2015 and Kesäyön valo (Midnight Sun) 2018. Kaisla was republished in 2012 as The Rough Guide to the Music of Scandinavia compilation’s bonus cd Introducing Kardemimmit (www.worldmusic.net/scandinavia). Autio huvila was chosen as the Finnish folk album of the year 2012.

You might wonder what the band’s name means. It’s a play of words. Kardemumma is a spice that Finnish people use a lot in their sweet baking. Mimmit is a word for girls that have bold nature. That means Kardemimmit is actually the Finnish Ethno Spice Girls.