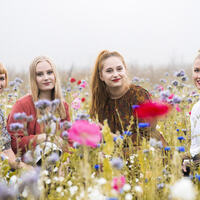 Please join us in welcoming Kardemimmit back to NMU! On Thursday, September 19th at 11 a.m. in the Reynolds Recital Hall we will be holding a Preview/Workshop with Kardemimmit where they will be discussing their music style, instruments, and give a preview of the show! This event is free and open to the public.

Kardemimmit is a band of four awesome women playing the Finnish national instrument, kantele. The band members are Maija Pokela, Jutta Rahmel, Anna Wegelius, and Leeni Wegelius. Kardemimmit is in charge of their own music – they compose, as well as arrange, write lyrics and produce. Alongside 15 and 38 stringed kanteles, singing has a big part in Kardemimmit’s musical universe where original pieces with a modern approach still have a strong foundation in Finnish, Eastern European and Scandinavian traditions. The Finnish reki-singing style, 19th-century dancing music, and Perhonjokilaakso kantele playing style, Eastern Finnish archaic improvisation, and ancient runo singing are all present in Kardemimmit’s music.