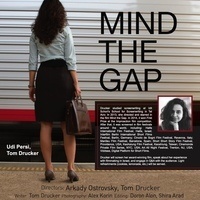 What do commuter trains and jellyfish have in common? Come to Israeli Film Night and find out! (Hint: Both can break your heart, "life stings" so "mind the gap.")

The Jewish Student Union (JSU) proudly presents: An evening with the noted Israeli actor and director, Tom Drucker. Tom will first screen her own award-winning short film, Mind the Gap (2014), which she directed and stars in; talk about her experience with contemporary Israeli cinema; and engage the audience in Q&A.

Then, she will host a screening of a short feature-length movie by another pair of celebrated Israeli directors, Etgar Keret and Shira Geffen's acclaimed Jellyfish (2007), and open up a discussion about it.

Both film's are woman-centered works that foreground women's experience, agency and authorship. Please join us for this progressive Jewish feminist event, reflecting on gender, life and love in Israel today, and celebrating free speech and viewpoint diversity on campus.