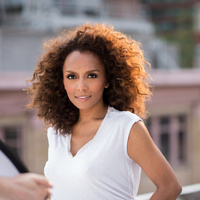 Janet Mock is a writer, director, TV host and producer whose memoir, Redefining Realness, debuted on the New York Times' best-seller's list in 2014.  Her second book, Surpassing Certainty, was released in 2017.

She is an advocated for the trans rights and the founder of #GirlsLikeUs, a social media movement that empowers trans women.

This event is sponsored by Platform Personalities and the Student Activity Fee.