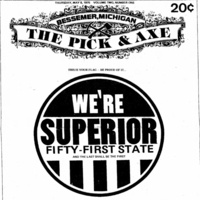 How and why did the Upper Peninsula become part of Michigan? Did it ever try to be its own state? Will it ever become one? These are just a few questions to be discussed in the Beaumier U.P. Heritage Center’s new exhibition, “The 51st State?” The exhibition will open with a public reception at 6 p.m. on Friday, October 11. Yooper hors d’oeuvres will be served along with other refreshments. If you going to the opening of “The Full Monty” at Forest Roberts Theatre, stop over before the show. The exhibition and reception are free and open to the public. The exhibit will be on display through March 28.

“The 51st State” will delve into how the Upper Peninsula became part of the State of Michigan and the various initiatives over the past 170 years to separate the Upper from the Lower Peninsula. It will begin by focusing on how the U.P. was originally the homeland of the Anishinaabek and how these lands were acquired by the United States. In addition, the exhibit will explore the cultural differences between the two peninsulas. Lastly, the exhibition will look at the financial and cultural realities of statehood in the 21st century.

On December 14, 1836 in Ann Arbor, at “The Frostbitten Convention,” a group of delegates ratified a compromise between the State of Ohio and Territory of Michigan, which finalized the location of the border between the two neighbors. As compensation for giving up their rights to the “Toledo Strip,” Michigan was gifted most of the Upper Peninsula, even though the land had still not been officially acquired from the Native American tribes and bands of the region. At the time, most Michigan residents were angry about the compromise, thinking they got the short end of the stick. However, that all changed when the region’s great wealth of resources began to be exploited and helped fuel the growth and expansion of the State and country. The exhibition will feature dozens of photographs, maps, artifacts and documents related to various statehood initiatives throughout the decades.