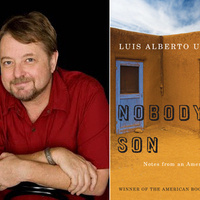 Join us for an evening with Luis Alberto Urrea author of Nobody’s Son: Notes from an American Life, this year’s Diversity Common Reader selection for NMU”s campus.

“I am nobody’s son. I am everybody’s brother,” writes Urrea. His story is unique, but it is not unlike thousands of other stories being played out across the United States, stories of other Americans who have waged war—both in the political arena and in their own homes—to claim their own personal and cultural identity. It is a story of what it means to belong to a nation that is sometimes painfully multicultural, where even the language both separates and unites us. Brutally honest and deeply moving, Nobody’s Son is a testament to the borders that divide us all. (courtesy of University of Arizona Press)

Free and Open to the Public