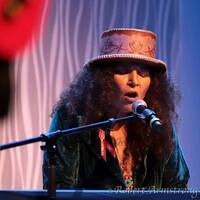 The Beaumier U.P. Heritage Center proudly presents a performance and workshop with 2018 Native American Music Award Artist of the Year, singer/songwriter Annie Humphrey.  On Saturday, February 16 at 7:30 p.m. that evening, she will be performing at concert in the Black Box Theatre in the McClintock Building at NMU. Local Anishinaabeg music group, Waawiyeyaa, will be performing an opening set.  Admission to the concert is $5 for the general public and $1 for students.

Annie Humphrey was born and raised on an Ojibwe Indian reservation in Minnesota, the daughter of author Anne Dunn. Her father taught her to play the guitar when she was in the first grade, and two years after that she taught herself piano and began writing songs. After attending high school and a community college, she teamed with guitarist Don Robinson and they made the 1989 album For the Children, which was released regionally. She spent a year in the Marines, stationed in Okinawa, among other places, and played in bands during this period. Returning to Minnesota, she attended the Police Academy and graduated, but decided not to pursue a career in law enforcement. Instead, she enrolled at the University of North Dakota in Grand Forks, where she studied art and began performing professionally at coffeehouses. In 1995, she made her first solo album, "Justice Hunter," which was released regionally. She moved back to the Ojibwe reservation and began performing around northern Minnesota. She sang three songs on the various-artists album "The Whispering Tree," released by the independent label Makoché, and Makoché signed her to a contract, giving her her first nationally distributed release, "The Heron Smiled," in 2000.